The preservation of British Military History

One week with the 28th Brigade

My name is Jack Deeney and, after serving some time as part of an U.S. Infantry Squad during the fighting in Korea, I was moved up to Battalion and eventually assumed the position of Battalion Intelligence (S-2) Sergeant of the 3rd Battalion, 17th Regiment, 7th Infantry Division.

In this capacity, I was placed on a one-week assignment, starting July 25, 1954, with the 28th Brigade of the 1st Commonwealth Division, assisting them in war games. If I recall correctly, the units involved were the 1st and 3rd Australian Rifles, the Essex Rifles and the Northamptons. Why a failed college student and draftee like myself was selected to assist professional soldiers in 'war games' is something I still puzzle over to this day. 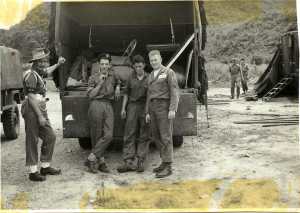 At any rate, it was an eye-opening experience for me and I thoroughly enjoyed it. I have a photo that I treasure (attached) and would like to share it with you. I cannot remember much of what transpired that week, except that I was awoken each morning with a mug of tea, got my first taste of Foster's and marveled at the idea of fist-fighting just for the hell of it. While I have forgotten the names of the men in the picture with me, I recently came across some old letters I'd sent home from Korea. One referred to my brief involvement with the 28th Brigade and a friendship with "..one old Irishman, Paddy Gallagher, who has been in the Army for 34 years and has been though 4 or 5 wars." Whether or not he was in the photo I sent you, I do not remember, but I do still have the black beret and insignia worn by the 'bloke' in the middle. He gave it to me right after the photo was taken.

I have many memories of Korea, good and bad (have even written about some of them) but this is one of the better ones.